What’s in a Name? Fostering Inclusion for all Firefighters through a Simple Change 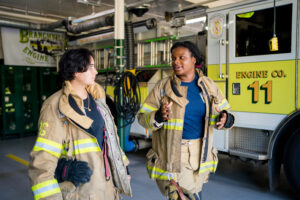 When did your organization change its name?

Bradley: The North Carolina State Firefighters’ Association kept the name Firemen’s Association from 1887 till July 1, 2016, when the name was changed.

What prompted your organization to change its name?

Betts: It was a push to honor the number of female members that we had.

Bissen: Legislators at the State Capital requested our name to be gender neutral to improve our capabilities to lobby and be successful during the legislative season.

Bradley: The association recognized that our name needed to reflect our membership. Also, many of our state’s statutes and programs had already changed from fireman, or firemen, to firefighter.

D’Alessandro: The association has discussed changing its name for several years. In 2021, several of our officers attended the IAFC VCOS Symposium in the Sun. There was considerable discussion about diversity and inclusion at the Symposium. Upon returning to New York, the discussion within our Association was renewed and ultimately put to a vote by our board of directors.

Did you encounter support or resistance along the way?

Betts: There was initial resistance toward the cost of making the changes.

D’Alessandro: While there had been spirited discussions over the years, the board vote in 2021 was unanimous.

What were the costs involved with making this name change?

Betts: They had to file a name change for the incorporation of the association, letterheads, and our flag (it was donated by a member with a uniform shop).

Bissen: It’s been over 10 years since the name change so I would need to investigate that a little more.

Bradley: Since the NCSFA was created by an act of the North Carolina General Assembly, we had to have them pass a bill to change the association’s name. Legal fees for filing the name change with the Secretary of State was our largest cost. Most of the other changes were taken care of by our staff. We immediately changed the name change on stationery and the web site; however, we phased in the name change over the next year as supplies, clothing, etc. were reordered. The total cost was $9,511.

D’Alessandro: The costs are still being assessed, but it is safe to say they are considerable. To mention a few, we need to update logos, change the name on our building, change all clothing and promotional items, stationary, etcetera.

What are some benefits you’ve seen since making this name change?

Betts: The organization continues to grow with the females in the Delaware fire service, and they make up a large component of our state EMTs.

Bissen: The new name of “Iowa Firefighters Association” is more neutral and we don’t have any complaints anymore.

Bradley: With the announcement and celebration of our name change the following month at our annual meeting and conference, we noticed a large increase in our attendance. This trend has continued each year since 2016. In addition, we have seen more female firefighters serving on the boards of our regional and state associations.

D’Alessandro: The name change has increased our “standing” as we pursue diversity and inclusion initiatives, especially in the areas of recruitment and retention. Practical benefits are yet to be seen since the change was just made.

What advice or tips would you give to other associations that are considering changing their name?

Betts: It was quite an easy change after the vote to proceed with the name change. All three county fire associations followed suit within a year of the state change. They all refer to firefighter now.

Bissen: It will be a positive move for the association.

D’Alessandro: I would advise organizations contemplating this type of name change to take their time and try to identify all the implications and action items it will create. Do you still want to use assets with the old name, or do you discard them? How do you inform your membership about the change? What will the total costs be and how long will it take to achieve a total rollout of the new name?

Is there anything else you’d like to add about the process that you haven’t already covered?

Betts: There was some discussion on calling it a gender neutral First Responders Organization as some of the EMTs in the state are not firefighters.

Bradley: Do a thorough review of the association’s bylaws, articles of incorporation, and state law to ensure the proper avenue is used to change the name. In our case, the name change required a change in state law rather than a change to our bylaws.