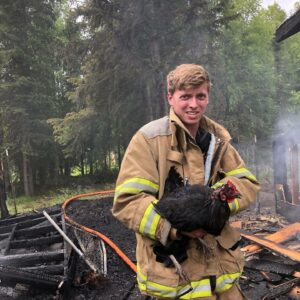 Why are you an NVFC member?
Originally starting in the fire service in New York State, I moved to Alaska for employment in 2018. Joining the Seward Fire Department just a month after relocating, I became a member of the Phoenix Chapter of the Alaska State Firefighter’s Association. As an ASFA member, there is automatic inclusion in the National Volunteer Fire Council as a way to provide training, funding or equipment information, and research materials.

Since joining the NVFC I have had a number of terrific opportunities. Among them have been the chance to attend online training sessions [and] review and incorporate coursework by others into trainings of my own. Beyond those, and perhaps with the greatest reward, the NVFC has given the chance to apply for support for my department through its cooperative giveaway programs. For these reasons, I am a proud member and supporter of the NVFC.

Why are you a fire service volunteer?
You could say I was born into it. I am a third-generation firefighter, with both grandfathers, both parents, aunts, uncles, and cousins on both sides of the family having served their own local communities. I still remember hearing the scanner crackle daily from my father’s office as a kid. Growing up, I couldn’t wait to be a part of my hometown department. On my 16th birthday, I was handed an application to join. Two months later I was voted in, and I was hooked. Since then, I have been fortunate to run with multiple agencies, often overlapping as a Mutual Aid member.

The last decade has been an incredible part of my life, learning and taking action from exterior to interior, becoming an EMT, moving up the officer line, and crossing state lines along the way. Reaching the position that I’m in now and being part-time to do it, has been a lifelong goal. At this point, being part of the fire service is part of who I am.

What year did you join the fire or emergency services?
2010

What are your memorable moments as a firefighter or EMS provider?
It seems like there are too many to count. For anyone who joins this service, there are calls that stick with you for laughs and others for the troubling memories they leave you. Tucked in along the run-of-the-mill and the EMS calls are the fun ones – the fire calls. A terrible day for others is our time to prove ourselves, put our training and our tools to the test. While back from an internship in November of 2015, I made a return visit to my college town to see some friends. I had gear from my hometown department in my car, the gear for this department was in storage until next semester. Sharing stories at the station, tones dropped for a reported house fire. One of the active commissioners was climbing in the cab, and I shouted and asked if he needed one more. He hollered back “Grab you sh*t and let’s go!” But over the intercom and the engine noise I heard “Take your sh*t and go home!” or something along those lines. I waved him off and watched the truck leave. It was a quick run and when they got back that commissioner caught up with me, spun me around, and said “Buster. I don’t care if you’re wearing turnouts from Kalamazoo. If you’re in town and structure tones drop, you get your a** on a truck.” Fast forward a couple hours and I’m with some non-department friends having lunch. The engine goes flying by northbound. I ran to the station to see what it was this time. Another reported house fire at the opposite end of the district. I grabbed the other gear, boarded the quint, and rolled second due to a working fire and ended up on the roof. From that point on, there is always gear with me, and a memory to last a lifetime.

Another one that sticks with me was much more recent. This last summer in my current department we were toned out for a structure fire with exposure to the tree line. As the epicenter for a 2019 wildfire that burned over 170,000 acres, the potential for another was anyone’s worst fear. My deputy chief and I were first to the station and rolled out with our primary engine, seeing the header before we had even turned the first bend in the road. What we hadn’t heard was that the structure involved was a chicken coop. After initial knockdown and mop up, we began the overhaul process on what little was left. Among the wire and fenceposts, two of us were shocked to see that one of the chickens was still alive. The look on the homeowner’s face when I brought it over was something else. On a return trip, we found the rooster. Out of all this ash and smoke, a 13-year-old rooster, “One – eyed Willy,” had made it through. Since that day, there have been plenty of chicken jokes shared around the station.

What contributions have you (and your department) made in your community?
At Cooper Landing Emergency Services, we strive to offer consistent quality fire and medical responses to a huge geographic territory. Responsible for fire, extrication, and EMS along parts of the deadly Seward and Sterling Highways, we respond to calls in an almost 200-square-mile area. As we navigated past wildfires and now the COVID-19 pandemic, we still continue to provide services beyond our fire and rescue obligations. In January of this year, we hosted our first community COVID vaccine clinic. In March we will be hosting a blood drive. Fortunate to receive the 2020 Anheuser-Busch Water for Wildland Firefighters donation through the NVFC, we were able to share canned drinking water with neighboring departments and to a bush community. A small-town organization with a big heart, CLES serves its community to the best of its ability whenever possible.