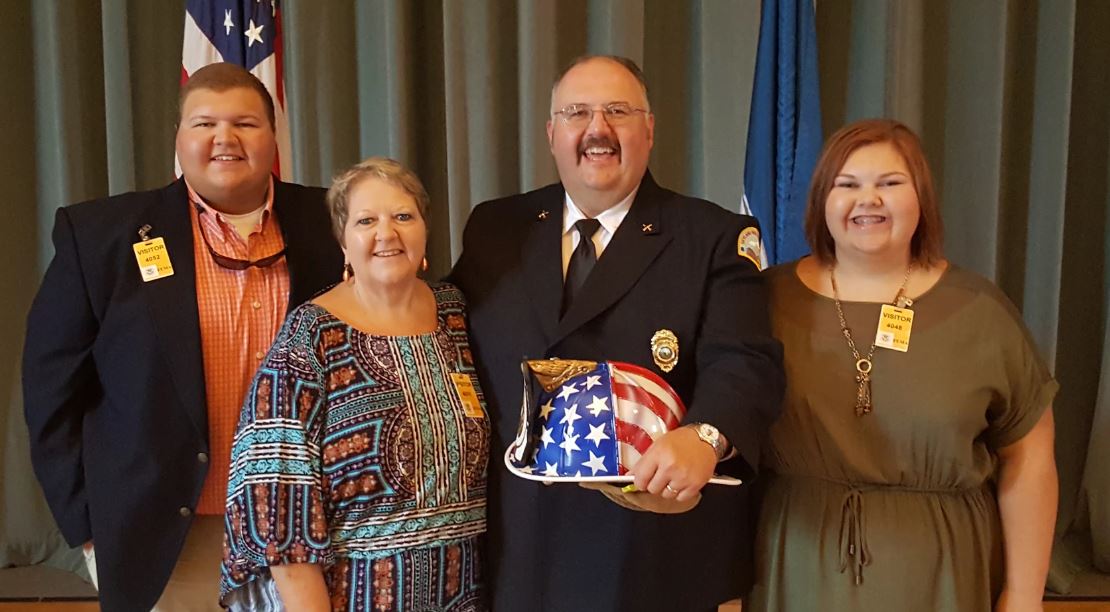 Why are you an NVFC member?
I am a NVFC member because I think the organization does an excellent service by helping educate the general public about services provided by volunteer personnel and how important the volunteer fire service is to communities all across our country. In addition, the organization strives to make the jobs of our first responders safer by supporting legislation, training, and policies which are beneficial and make it easier for people to become or continue to serve their community as volunteer public safety personnel. Furthermore, the NVFC serves as a unifying factor to help volunteer public safety professionals speak with one voice.

What is your occupation?
Elementary school assistant principal

Why are you a fire service volunteer?
My father was a World War II veteran and later a public safety officer for the Tennessee Valley Authority (TVA) from the mid-1940s until the early 1970s, where he worked as a team member to provide law enforcement, fire, and emergency medical services to civilians and employees on various TVA reservations. From an early age I was interested in the fire service, and watching the television series EMERGENCY! during the 1970s helped develop an intense passion for wanting to be a firefighter.

When I was almost 10 years old, my family moved to a community in a rural area of western North Carolina which was just beginning to form a volunteer fire department, and I began to hang around the fire station every time I saw the doors open. As I became a teenager, I continued to spend a vast amount of time at the station because I was driven to learn everything I could about the fire service. As a high school [student], I attended any kind of fire training possible and also became a certified EMT employed by our county EMS prior to graduation and later became a fire service instructor. Over the next several years in college and with employment as a high school social studies teacher, I continued to take more classes and achieve multiple public safety certifications while serving through the ranks to eventually become the chief of the volunteer fire department in which I began service.

With each step of progression, culminating at the present time with completion of the Executive Fire Officer Program at the National Fire Academy, I have felt a more intense desire to help other people during the worst day of their life and to help train and prepare new emergency service personnel for the critical jobs that lay ahead of them. I have been blessed beyond imagination with the satisfaction of helping to bring some degree of comfort and normalcy back into the lives of those in crisis from a fire or medical emergency while at the same time having had the opportunity to interact and train with some of the greatest people in my community, state, nation, and from many other parts of the world who share the same passion to help make the lives of others better.

Like most young people involved in emergency services, I was initially driven by the excitement and adrenaline; however, to become that person that other people could depend upon for assistance when needed was something that was instilled in me at an early age and continues to this day, and that is the reason that I have served as a volunteer firefighter for the past 40 years and a public educator for 28 years.

What year did you join the fire or emergency services?
1979

What are your memorable moments as a firefighter or EMS provider?
My most memorable moments as a firefighter/EMT have been those in which I was part of a team working to hone training skills or provide prompt and efficient service to those in need of emergency services or just a kind word. In some ways, this is a difficult question because some of worst calls pop into mind; however, my father taught me that the good always outweighs the bad, and this has basically been my life philosophy. The most memorable and lasting experiences have been the rewards of being of service to others in need and the personal and professional relationships and the life-long friendships I have had the fortune to develop over these many years of involvement in public safety service.

What contributions have you (and your department) made in your community?
Over the past several years, my current volunteer department, which serves a small town and surrounding rural district as well as providing assistance to other departments within my county and state, has increased our training regimen and standards as well as substantially improving our district’s fire insurance rating and updating equipment and apparatus with an intense focus of firefighter safety, health, and wellbeing.

In addition, we have assumed greater responsibilities for providing additional services to our citizens, including preparation for high-rise operations with the construction of a casino on tribal land within our fire district as well as training for and appropriating equipment for many types of technical rescue including vehicle stabilization and extrication, confined space, high and low angle rope, and agricultural while also enhancing public education opportunities with the addition of the only fire safety trailer within our region of approximately five counties in western North Carolina.

In recent years, members of my department have become more involved in community outreach programs like Shop with a Cop, the Big Brother/Big Sister program, Toys for Tots, and Salvation Army charities.