Technology, Safety, and FirstNet: The Impact of 9/11 on Modern Firefighting

On the morning of September 11, 2001, people around the globe were shocked by the news of the terrorist attacks in New York City, Washington, D.C., and Pennsylvania. The world was irreversibly changed by those attacks, and it became a pivotal point for the public safety community across the United States.

The tragedies of 9/11 underscored fundamental problems with communication systems used by our nation’s first responders. The radios relied on by police, fire, and paramedics did not easily operate across different agencies. Land and mobile phone lines were overwhelmed by a high volume of calls. First responders struggled to communicate with each other.

As a result of those challenges, the 9/11 Commission Report recommended establishing and public safety came together to push for an interoperable nationwide network dedicated to public safety. In 2012, Congress passed the Middle Class Tax Relief and Job Creation Act. The law allocated $7 billion and 20 megahertz of broadband spectrum to establish a network for the nation’s first responders, while establishing the First Responder Network Authority, or FirstNet Authority, to ensure the buildout, operation, and maintenance of that network.

Public safety’s network is a reality

Today, public safety’s nationwide broadband network — FirstNet — is a reality. FirstNet is built through a first-of-its-kind private-public partnership between the FirstNet Authority and AT&T. Since its launch in 2018, public safety has been quick to adopt the network — reaching more than 2.2 million network connections this year. According to AT&T, more than 90% of public safety’s dedicated spectrum, Band 14, has been deployed.

FirstNet has supported first responders, including both volunteer and career fire departments, in almost every type of emergency or incident, from hurricanes, floods, and tornados to coping with and confronting the COVID-19 pandemic.

In the 20 years since 9/11, technology has changed rapidly for all of us. Fortunately, dedicated public safety broadband is providing fire departments with powerful new capabilities and modernizing their communications.

FirstNet is different because of its physically separate network core that separates public safety traffic from commercial traffic. The core’s separate infrastructure gives public safety users unique features like: priority and preemption, more than 100 FirstNet deployables, and a catalog of public safety apps and rugged devices designed for FirstNet subscribers.

The volunteer fire service puts FirstNet to the test 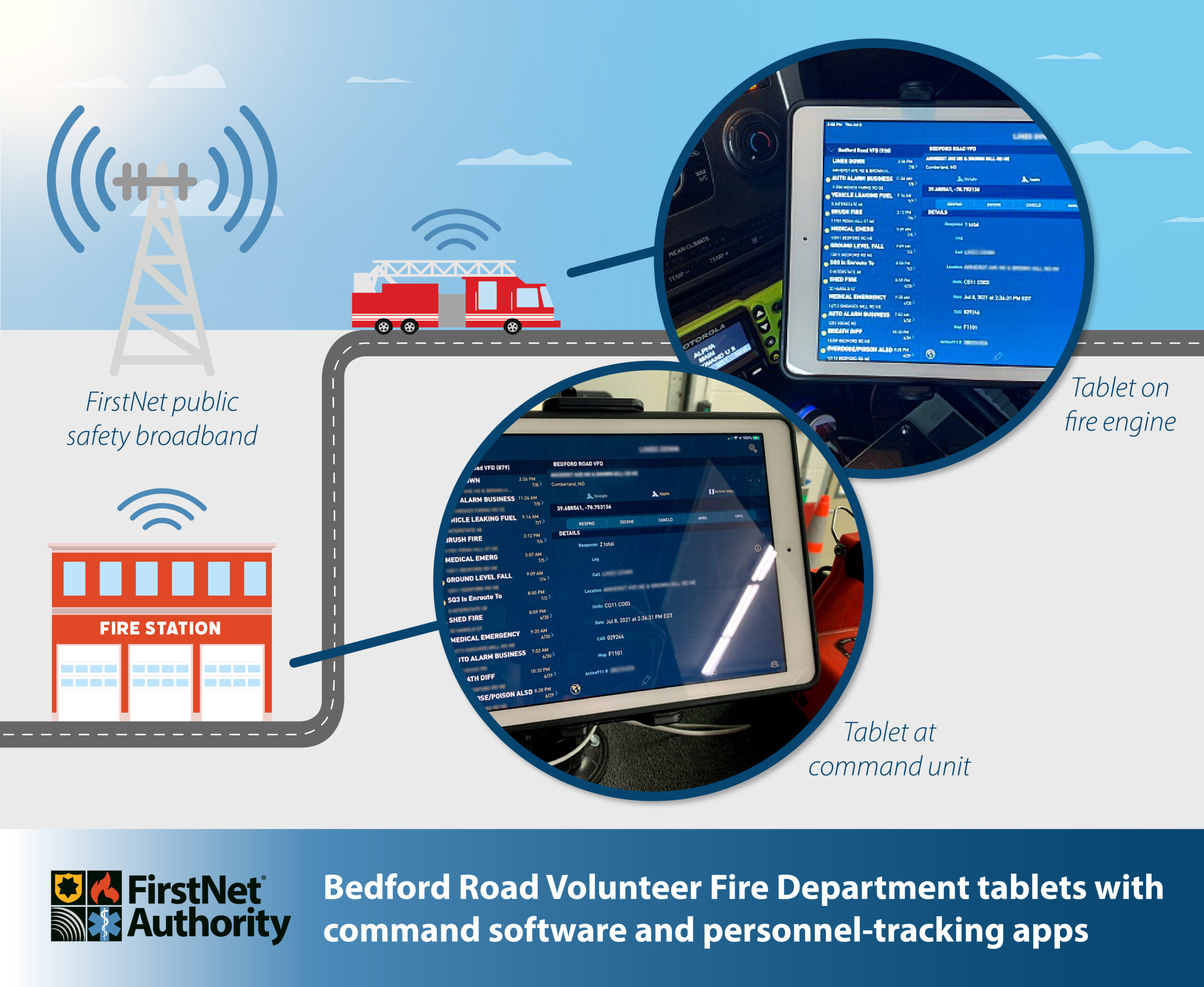 In the fire service, situational awareness is everything. The more information responders have about their environment, the better decisions they make to keep everyone safe and complete the mission.

FirstNet subscriber Eddie Collins, chief of the Bedford Road Volunteer Fire Department (BRVFD), relies on FirstNet’s prioritized and preemptive service to help serve and protect residents in the Cumberland area of Allegany County in Maryland. Collins initially enrolled in FirstNet through the Subscriber Paid Service program as an individual user, gaining access to FirstNet’s benefits and capabilities on his personal device. For Collins this meant uninterrupted service while patrolling mountainous Interstate 68 and when traveling to neighboring Pennsylvania and West Virginia for mutual aid missions. Collins’ firsthand experience operating on the network convinced many Bedford Road volunteers to convert their personnel devices to FirstNet.

Since then, BRVFD used state grant money to purchase four FirstNet Ready™ iPads loaded with command software and personnel-tracking apps. Within hours of signing up for FirstNet, the department was deployed to a house fire in a mountainous area prone to communications challenges. With the BRVFD engine serving as a command engine, the incident commander used a FirstNet connection to coordinate staffing, track supplies and resources, and load mapping software to find water supplies.

“Since the first application to our service, we now use the tablets with FirstNet connectivity daily for command situations, technical rescue operations, as well as rescue operations,” said Collins. “It has made our fire and rescue grounds safer.”

The experiences of public safety agencies using FirstNet, like the Bedford Road Volunteer Fire Department, are a driving force for the network. This is critical input for the FirstNet Authority in ensuring that AT&T delivers on the terms of its contract and creates a network that meets the needs of public safety, now and into the future.

The FirstNet Authority also directs investments in the network so that it evolves, grows, and innovates based on public safety’s needs. Both of these functions — oversight and investment — are unique to FirstNet.

The first investments were authorized by the FirstNet Authority Board in 2020 and included initial upgrades to enable access to 5G services. Today, FirstNet subscribers have access to AT&T’s 5G spectrum in a growing number of cities and venues across the country. This is the start of a multi-phase, multi-year journey to deliver full 5G capabilities on FirstNet for public safety.

Access to 5G is a major development for FirstNet, yet this is just scratching the surface of future innovations for first responders. 5G’s next generation technology will provide peak data speeds, higher throughput capability, and improved latency. Through a greater use of video and drones, more accurate location data, and an ecosystem of connected sensors, 5G is changing public safety communications.

FirstNet is your network

As we mark the 20th anniversary of the 9/11 attacks, we will never forget why FirstNet exists. The lessons learned from communications challenges of the past helped shape the FirstNet network. Through the leadership and input of the National Volunteer Firefighter Council and other public safety organizations, the network was designed to meet the needs of all public safety personnel.

Together, the FirstNet Authority, the fire service, and the entire public safety community must continue to work together to ensure FirstNet continues to evolve and delivers what public safety needs now, for the next 20 years, and beyond.