Complaints of illnesses, odors, and explosion have resulted in increasing calls of emergency responders to sewer repair worksites. Bystanders in nearby school, healthcare, office, and residential buildings have been affected, often describing noxious glue-like odors, headaches, nausea, vomiting, and other chemical exposure symptoms. In some cases, victims have required onsite medical treatment and been hospitalized, including children.

The most popular sewer repair practice, called cured-in-place-pipe (CIPP), is associated with these incidents. As communities expand sewer pipe repair efforts, increasing the likelihood of public health events, emergency responders must have a basic understanding of this practice and its chemical risks.

To create a plastic CIPP, contractors bring raw chemicals onsite, insert them into the buried pipe, and then cure or cook those chemicals to manufacture a new plastic pipe. The most popular curing processes involve heat (injection by steam or hot water) or ultraviolet light (no water is used). CIPP is the least expensive pipe repair method available and a CIPP job can be completed in as little as two hours. Chemical resins used for CIPP are similar to those used in boat manufacturing. However, for boats the generated wastes are captured and treated inside factories. Boat manufacturing companies also report air pollution discharges to comply with federal and state laws. 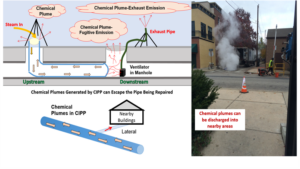 CIPPs are created in buried sewer pipes, the waste is discharged into air through manholes and nearby sewer laterals, and the white material is plastic manufacturing waste, not steam.

The public safety risk of CIPP is associated with its direct discharge of untreated plastic manufacturing waste into the surrounding air and environment. Waste discharge has injured bystanders, contaminated buildings for months, and contributed to at least one indoor explosion. Contractors can add more than 25 psi pressure during CIPP creation, while only a few psi are needed to blow out water from building plumbing traps, causing waste to enter living spaces through sewer lines and drains. Waste can and has also entered buildings through windows, doors, foundation cracks, and HVAC system intakes.

The waste blown into the air can include uncooked resin, partially cooked resin, chemical saturated water vapor, particulates, semi-volatile organic compounds (SVOC), and volatile organic compounds (VOC) including styrene, benzene, acetone, methylene chloride, and others. An estimated six to 20 tons of VOCs can be released into air per project. Studies at Purdue University have revealed exposure to this waste is acutely toxic to mouse lung cells. Acute exposure is the primary concern for bystanders. The farther from the worksite, the greater chance the waste only includes organic vapors, not resin and particulates.

What do Government Agencies Say?

Since 2017, various federal worker and public safety agencies have begun to take note of the increasing popular construction practice being used in neighborhoods nationwide. In 2017, an OSHA investigation revealed that a 22-year-old died on an Illinois worksite partly due to chemical overexposure. NIOSH studies have revealed worker safety chemical exposure limits being exceeded at multiple construction sites and noncompliance with OSHA safety standards. Florida and California state health departments have issued warnings about chemical exposures and bystander health impacts associated with CIPP.

12 Things to Expect if Responding to a CIPP Worksite

Backed by U.S. government agencies, we and our collaborators have conducted testing at CIPP construction sites, on the resins themselves, and created CIPPs in the lab. To this end, we have identified best practices for responding to incident sites to reduce exposures and injuries. These findings are important for emergency responders and health officials to understand.

To reduce risks posed to emergency responders and bystanders, public safety agencies can take several actions. Agencies are encouraged to petition public works and infrastructure owners who wish to use CIPP to require the capture of waste and/or use of less polluting practices. Requiring that the public health department be notified by the infrastructure owner before projects begin is also encouraged as the health department can track incidents. A free NIOSH health hazard evaluation can also be requested to better understand the hazards faced when needing to enter contaminated buildings and worksites.

CIPP can likely be used without endangering human health if appropriate controls are implemented. With the Infrastructure bill now signed into law, likely expanding the usage of CIPP, emergency responders should prepare their communities to avoid and address these incidents.

Andrew Whelton is a professor of civil, environmental, and ecological engineering at Purdue University and director of the Healthy Plumbing Consortium. Jonathan Shannahan is an assistant professor of health sciences at Purdue University. This article was partly based on a new study entitled “Emergency responder and public health considerations for plastic sewer lining chemical waste exposures in indoor environments” from the Journal of Hazardous Materials. The study was funded by the National Institute of Environmental Health Sciences and National Science Foundation. Additional information on CIPP can be found at the Purdue University web site.