The National Volunteer Fire Council (NVFC) honored four exceptional members of the volunteer fire service for their achievements at a special banquet on April 8 as part of the organization’s spring meeting.

The NVFC will present the Junior Firefighter Program of the Year Award, sponsored by California Casualty, to the Rowlett (TX) Explorer Post One during a local ceremony later this month to ensure all members of the program have the chance to attend.

“Members of the volunteer fire and emergency services give back to their communities in extraordinary ways, and we are pleased to join with our sponsors to recognize some of these amazing achievements,” said NVFC chair Steve Hirsch. “These awards honor those who have dedicated a lifetime to their communities to those who are leading the way for the next generation. I couldn’t be prouder of the work that all of our award recipients have accomplished.”

Read on for more information about the award winners who were honored at the banquet. 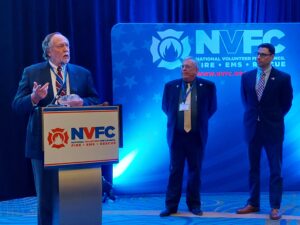 Phil Stittleburg got his start in the fire service while in law school as a paid firefighter at a combination department in suburban Madison, WI. Upon receiving his law degree and entering practice, he joined the LaFarge (WI) Fire Department as a volunteer in 1972, just 30 miles from the dairy farm where he grew up. Five years later, he was appointed chief of the department, a position he continues to hold.

Since joining the NVFC more than 40 years ago, Stittleburg has made significant contributions to the organization and the national fire and emergency service community. He was appointed as the NVFC director from Wisconsin in 1979, four years after the organization’s founding. Stittleburg served as the NVFC chair from 2001-2015 and chaired the NVFC Foundation for 13 years. Additionally, he represents the NVFC on the National Fire Protection Association (NFPA) technical committee on Fire Department Occupational Safety and Health Program and technical correlating committee on Professional Qualifications, on the Organización de Bomberos Americanos (an association of North and South American fire service organizations), and at countless events and meetings. He also periodically authors articles for the NVFC and other fire service organizations.

Furthermore, Stittleburg serves as legal counsel to the LaFarge Fire Department and the Wisconsin State Firefighters’ Association. He is a former chair of the NFPA, served on the board of the National Fallen Firefighters Foundation, and is chair of the Fire Protection Technician Program Advisory Committee at Western Technical College in La Crosse, WI.

Stittleburg has been recognized for his contributions to the volunteer fire service on numerous occasions, including being named Fire Chief Magazine’s Volunteer Fire Chief of the Year in 1998 and receiving the Fire Prevention Award from the Wisconsin Fire Inspectors Association in 1983.

Stittleburg worked as an assistant district attorney for the State of Wisconsin for 36 years and is currently a partner in the general practice law firm of Jenkins, Stittleburg, and Menn. He lives with his wife Kathy in LaFarge, WI, and in his free time enjoys reading and foreign travel. 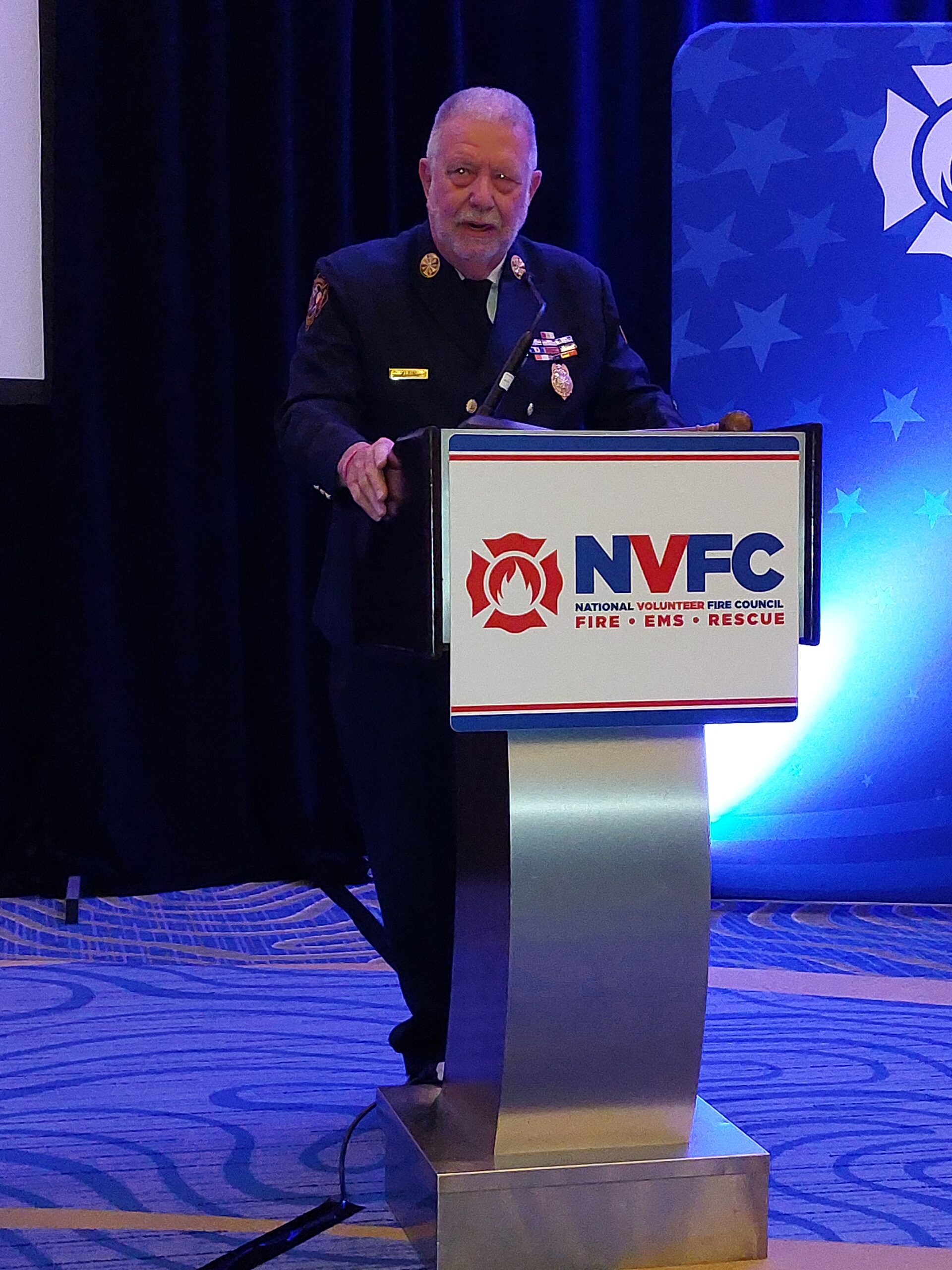 Klein joined the Firemen’s Association of the State of New York (FASNY) in the late 1960s and was appointed to the Fire Prevention Committee. While on this committee, he created a statewide coloring contest on the theme of fire prevention and life safety. This initiative led to thousands of posters being submitted for judging, with several shared through the development of a fire prevention and life safety calendar that was mass produced by FASNY and distributed to schools across the state.

Since then, Klein has served as a director, vice president, and president of FASNY, working tirelessly on issues including increased training opportunities, presumptive cancer legislation, and dealing with the COVID-19 pandemic. He currently represents FASNY on the New York State Task Force on Recruitment and Retention, which is working to bolster volunteer first responder staffing statewide.

Klein served as a Trustee of the FASNY Firemen’s Home from 2002 until 2012, holding the position of secretary of the board for seven of those years. He also has been a director of the FASNY Foundation since 2004 and is currently serving as president of the board.

Retired from the USPS, Klein is a father of two and a grandfather of four. His son, Kevin, is also a former chief in the Oceanside Fire Department, and his grandson, Chris, serves as assistant treasurer with the department. 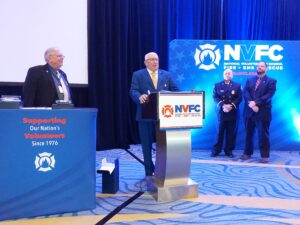 John M. Buckman III has dedicated his life to the fire service and has made a significant impact in advancing the health and safety of first responders, especially in the area of cancer prevention. He served as a German Township (IN) fire chief managing volunteers for 35 years and was a founding member of the International Association of Fire Chiefs’ (IAFC) Volunteer and Combination Officers Section (VCOS), where he currently serves as education coordinator. In addition, Buckman served as the Indiana Fire Academy Director for 15 years, is a past president of the IAFC, and is the director of government and regional outreach for IamResponding. He has authored over 150 articles, published several books, and presented training programs in all 50 states, each province in Canada, and in China.

In 2013, Buckman facilitated a meeting that resulted in the development of the Firefighter Cancer Support Network’s white paper, Taking Action Against Firefighter Cancer. This was the first national report to identify occupational cancer as a risk to firefighters. In 2016, Buckman facilitated a second meeting to update the original report. He also contributed content for both reports. The participants of these meetings came from the legal, medical, and social research sectors as well as the fire service — including representatives from volunteer, combination, and career departments and local and state fire training directors. The discussions addressed prevention, diagnosis, treatment, and the long-term implications for firefighters, their family, the fire department, and the community. Importantly, the group identified a series of actions that firefighters can take to reduce their exposure to chemicals that can cause or facilitate cancer.

Buckman was also one of the editors for the Lavender Ribbon Report published by the VCOS and the NVFC in 2019. This report provides guidance to the volunteer fire service on how to implement 11 best practices for reducing exposure risks. Two years later, he and fellow advocate Brian McQueen spearheaded an update for the Lavender Ribbon Report that provides additional information, tools, and motivation for implementing the best practices.

Buckman has received much recognition for his work in the fire service, including Fire Chief Magazine’s Fire Chief of the Year (1996), Indiana Governors Meritorious Service Award, NVFC Lifetime Achievement Award, and the President’s Award from the International Society of Fire Service Instructors. 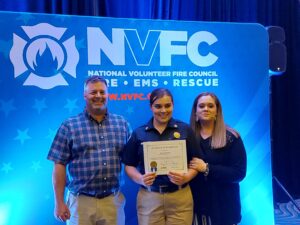 Kaylee Gianforte was very shy when she moved from a previous cadet program to join the Clemmons (NC) Fire Department cadet program, but with the support of the department members she quickly embraced the fire service and gained the confidence and drive to move ahead. She regularly scheduled herself outside of school hours to come work with each shift to get different perspectives of what it takes to be a full-time firefighter. It soon became clear she was on a fast track to successfully becoming a leader in the youth program.

In January 2020, Gianforte took advantage of an opportunity to excel in her leadership development and was selected as the 2020-2021 cadet chief. In this role she led cadets during training, interviewed program applicants, marketed and advertised the program in the community, helped with teaching fire safety to elementary school students, and assisted the fire department with various tasks. She has worked especially hard to promote the program to other female teenagers that share an interest in serving their community through volunteering.

While her leadership skills thrived, Gianforte was initially nervous about teaching or speaking in front of others. However, she exceeded expectations by thoroughly researching the assigned topics and putting together better training classes than many experienced firefighters can do. The department’s leaders could see her self-confidence growing as she taught, and the audience was very in tune with her discussion. After her first class, Gianforte realized that she knew her topic so thoroughly, she lost the nervous feelings. She has since taught many trainings and also has become a mentor to newer cadets to share her knowledge with them.

Gianforte was a key player in planning and executing the cadet program’s first fundraiser golf tournament. She and the other cadets reached out to community businesses for sponsorships and donations, as well as advertised the tournament to potential players. As cadet chief, Gianforte supervised the other cadets on the day of the tournament and helped them with any issues or questions they had.

Gianforte is looking forward to continuing her fire service career. After graduating high school early, she started at the Firefighter Academy at Forsyth Technical Community College in January 2022.