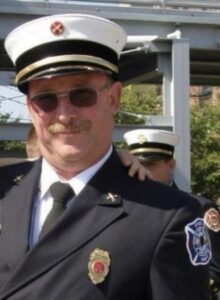 The National Volunteer Fire Council (NVFC) is saddened by the passing of board member Gregory Schultz on April 20. Schultz joined the NVFC board in 2017 as a director from Kentucky and dedicated his life to serving his community as well as the fire and emergency services on the local, state, and national levels.

After retirement, Schultz remained very active in the fire service. He tirelessly worked on recruitment and retention initiatives for the Burlington, Alexandria, and Southern Campbell Fire Departments, served as chair of the Kentucky Firefighters Association’s public education committee, and instructed classes in regional schools and the state fire school. His career came full circle as he had started at Southern Campbell Fire Department and had been serving with them again at the time of his passing. His many accomplishments included becoming the first fire board chair for Campbell County Fire District #1 and being recognized as Firefighter of the Year twice. In addition to his fire service career, Schultz was the owner of Greg Schultz Land Surveying for nearly 40 years.