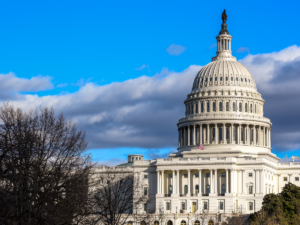 In December two major pieces of legislation were signed into law: the James M. Inhofe National Defense Authorization Act for Fiscal Year 2023 (P.L. 117-263) and the Consolidated Appropriations Act (P.L. 117-328). Each of these laws contain provisions that affect the fire and EMS services.

This year’s annual National Defense Authorization Act (NDAA) amends the Federal Employee Compensation Act to award federal firefighters with the presumptive benefit that a cancer-related disability or death was the result of their work. The NDAA also directs the Department of Defense to stop purchasing turnout-gear containing PFAS once a PFAS-free alternative has been developed as well as to release information on the health effects of PFAS exposures for firefighters, veterans, and their families.

The Consolidated Appropriations Act, otherwise known as the Omnibus Bill, provides funding to the federal government for the remainder of Fiscal Year 2023, including fire related programs and agencies.

Additionally, this legislation provides $65 million to the Public Housing Fund of the U.S. Department of Housing and Urban Development for competitive grants to public housing agencies to evaluate and reduce residential health hazards, including lead-based paint, carbon monoxide, mold, radon, and fire safety, of which not less than $25 million is specifically for lead hazards. This legislation also extends Medicare Ground Ambulance Add-On payments to January 1, 2025. The ground ambulance add-on payment policy increases the base payment and mileage rate for ground transports by 3 percent for rural zip codes and by 2 percent for transports originating in urban zip codes, while the super-rural add-on payment policy increases the base payment for ground ambulance transports by 22.6 percent where the point-of-pickup zip code is designated as super-rural.

The National Volunteer Fire Council (NVFC) will continue to advocate for our funding priorities in the 118th Congress. Sign up for action alerts to be notified when action is needed to help support an important piece of legislation. Please do not hesitate to reach out to NVFC chief of legislative or regulatory affairs, Ryan Woodward, at Ryan@NVFC.org if you have any questions about these two laws or other policies.