There is no better longer-running appearance of volunteerism in the history of the United States than the volunteer fire service. Unfortunately, from a national perspective it is undeniable that volunteer fire departments are feeling serious effects of waning memberships. Fewer people today convey the craving to join thus resulting in some fire departments being forced to close their doors for good. Moreover, seasoned, highly-trained, long-time volunteers possessing unparalleled experience are leaving the fire service due to age and medical issues, which is creating a substantial vacuum of specialized skills in many departments.

This same effect is not only occurring nationally, but throughout West Virginia, and at alarming rates in some areas of the state. Most recently, two Marshall County volunteer fire departments closed their doors for good due to increasing insurance costs and a lack of interested volunteers.1

Upshur County (WV) is not immune to declining firefighter volunteerism and as a direct result some departments are now missing multiple paged calls for service, which is forcing residents to experience extended response times because of firefighter unavailability. This places our communities and citizens in a condition of grave risk.

Just how valuable are volunteer firefighters to a local community? When today’s financial experts attempt to determine the true economic value of firefighters volunteering for their local community, they usually only look at wage replacement costs, thus failing to incorporate a firefighter’s intrinsic worth. A wage only replacement approach noticeably fails to determine the genuine value of firefighters based on the underlying perception of their real value, which includes all aspects of their worth in terms of a few tangible and an abundance of intangible aspects. Simply put, the true intrinsic value of volunteer firefighters nationwide and statewide cannot be conclusively calculated, and the very same holds true for Upshur County’s volunteers.

Regarding tangible components, some can be easily identified and calculated. According to current data, nationwide volunteer firefighters save citizens approximately $139.8 billion dollars2 annually in taxes and another $450 billion dollars3 in lower insurance premiums, which combined equates to a $589 billion dollar impact on the U.S. economy.

According to the West Virginia State Fireman’s Association, throughout West Virginia, there are 419 volunteer fire departments serving nearly 80 percent of the state’s population. The association further states that over 100 municipalities are protected by paid police departments while at the same time being served by volunteer firefighters, entirely, for fire rescue services. Today, over 90 percent of all firefighters throughout this state are non-paid professional volunteers and these numbers are dwindling rather quickly.

With the diminishing number of volunteer firefighters adversely impacting local communities throughout West Virginia, and also Upshur County, it has become paramount for local elected leaders to now assume the responsibility of placing a real dollar value on professional fire protection services. Officials need to earnestly consider placing firefighters on par with paid law enforcement officers and strategically planning how to fill the void of volunteer firefighters in the future. Elected leaders must realize that firefighting today is a highly trained discipline, just like law enforcement, and is of utmost importance to citizens.

Presently, firefighting and fire department operations are heavily regulated by federal and state law and constantly changing industry standards, more so than many businesses. It is no longer a social club or a hobby, as many continue to believe, nor will a few free-will BBQ chicken fundraising dinners generate sufficient revenue to operate year-round. With aggressive recruiting efforts constantly failing, and the declining number of volunteer firefighters throughout our county increasing, volunteers will likely need to be replaced, either entirely or in part, with career firefighters to keep communities properly and adequately protected in the near future.

Since the creation of the very first fire department in Upshur County, firefighters volunteering their time to unselfishly serve their community have continually increased their net worth over all, to include the quintessential quality of intrinsic value. Every firefighter knows there is something powerful about their drive for meaning while serving in the fire service. Every firefighter will unequivocally state the exact moment they realized the true meaning of their work, as it instantly became an explosion of inspiration to do even more.

Placing an exact dollar amount on Upshur County volunteer firefighters’ time and service to the community they serve is understandably much more complex, if not totally unascertainable, especially when attempting to calculate their intrinsic worth to the community.

Firefighters throughout Upshur County provide countless intangibles, for which the precise worth just cannot be totaled. Volunteers constantly demonstrate the amount of support their fire department has throughout the region they serve while providing collateral support to the organization. Habitually they find themselves on a moment’s notice, at all hours of the day, working in ultra-hazardous conditions and environments. This work requires specialized skill sets while lives are dangling in their hands.

Continuing the calculations of the tangible values of Upshur’s firefighters, the average mean wage of career firefighters in West Virginia, according to the U.S. Bureau of Labor’s most current Division of Occupational Employment Statistics report, is $14.03 per hour.4 However, for volunteer firefighters this wage is higher at $15.02 when assessed by the West Virginia assigned-risk Volunteer Fire Department Workers Compensation Premium Subsidy Program, according to the National Council on Compensation Insurance, Inc.

Calculating volunteer firefighter coverage hours to have just one firefighter on duty at each of the seven volunteer fire departments throughout the county, having 24/7/365 coverage making the NCCI wage, would cost Upshur taxpayers $918,503.04 per annum. Additionally, when applying the National Fire Protection Association’s recommended minimum staffing for one engine, which requires four firefighters, this results in an increased cost to taxpayers of $3,674,012.16 yearly. Moreover, when calculating employee benefits in the firefighter’s total compensation package using a standard burden rate of 33%, this creates an increase of over $1.2 million dollars and therefore brings an annual tangible cost to Upshur’s taxpayers to $4,886,436.17.

These costs thus demonstrate substantial financial savings for Upshur County citizens, year after year, because volunteer firefighters unselfishly give of their time, energy, and specialized talents and skills to serve their community. Most notably, however, firefighters perform these services free of charge to the community, but at the expense of their family, especially on holidays and special occasions.

In 2014, the amount of funding (excluding department fundraising, individual donations, and grants) received by all volunteer fire departments throughout Upshur raised by the county’s fire service fee was approximately $182,000. Another $327,709.69 was received from the state of West Virginia through the Insurance Surtax on property and casualty premiums. Combined, this collective amount of $509,709.69 received is painfully pale in comparison to the $4.88 million dollars that would be needed to staff all volunteer departments complying with NFPA standards for 24/7/365 coverage with paid staff if there were no more volunteer firefighters.

For example, in calendar year 2014, the Banks District Volunteer Fire Department’s liability insurance and workers compensation insurance premiums together totaled $27,678, and the $26,000 received from Upshur’s fire service fee5 was inadequate to cover just these two expenses.6

Upshur County is not much different than many other rural communities throughout the state, as nearly all of Upshur’s firefighters are volunteers. Throughout the county, other than seven career firefighters employed by the city of Buckhannon, every other firefighter is a professional volunteer who receives no financial compensation whatsoever for the services they perform or for training or attending business meeting nights.

Because of what is frequently viewed on TV or read in the news, and understandably so, everyone today seems worried about credit card fraud, identity theft, or having their Facebook account or computer files compromised. However, in reality most are more likely to be involved in a motor vehicle crash, have a medical emergency, or suffer a loss of property by fire. Essentially, virtually everyone will need to call upon the services of their local fire department at some point in their lives a time or two, or three, and here in Upshur, it will be the faithful arms of a local volunteer firefighter reaching out to handle the call, that is, until their numbers become so diminished that they become fully extinguished.

The volunteer fire department, an institution dating back to Ben Franklin, is slowly going the way of the horse-drawn pumper. If anyone is seriously interested in reversing the trend of Upshur County’s diminishing volunteer firefighters and want to help their community, you are strongly encouraged to contact your area volunteer fire department. There are nearly five million tangible and countless intangible reasons why you should. 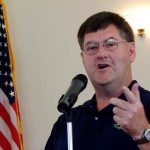 David D. Taylor, JD, is a retired homicide detective from the Marion County Sheriff’s Office in Ocala, FL, and is currently a volunteer firefighter and the Public Information Officer for the Banks District Volunteer Fire Department in Rock Cave, WV. David is a strong advocate in promoting the volunteer fire service throughout the state of West Virginia. He is a graduate of the Florida Coastal School of Law in Jacksonville, FL.