The Impact of Technology and Innovation in the Fire Service

Separating the “should” from the “could”

Has this ever happened to you? I received an email the other day notifying me that an update had been released for my TV and that I need to download and install this update in order for the apps to continue to function correctly. First of all, I had no idea I even could update my TV and second of all – apps? What apps?

I have had this television for a little over two years and I have never received an email notifying me of an update, so I dutifully printed the email and headed to the family room, instruction in-hand. The instructions stated that I needed to use the remote to navigate a series of menus in order to install the update. Remote? I am sure the TV came with one; however, I use the remote on my receiver for everything. I hadn’t seen the TV remote since the day I bought it. So, step one – find the remote.

After some searching, I managed to locate the remote, but after two years, the batteries inside were dead and corroded. After doing a little internet research on how to clean corrosion (white vinegar, in case you are wondering), I managed to clean the terminals, insert fresh batteries, and access the setup menu described in the instructions, only to realize that now I needed to connect the TV to my wireless network, which is another feature I had no idea that the TV had. Once the TV was connected to the internet, I was able to download and complete the upgrade, which took about 30 minutes.

This was all necessary so I could continue to use apps, which I didn’t even know it could do. What apps? Well, it turns out, quite a few. Some are pre-installed and others can be downloaded. Why hadn’t I known this? In reviewing the pre-installed apps, Netflix was the first on the list. I decided to count the number of devices through which I can watch Netflix. The total? Seven. Seven different devices connected to my TV are capable of streaming Netflix. In addition to the TV itself, the receiver, the DVD player, AppleTV, my home computer, my iPad, and my iPhone can all stream Netflix to my TV. Who knew?

Sometimes, new innovation occurs by combining two or more existing technologies in a new way in order to provide a new benefit. As an example, when Scott Safety introduced the 5,500 psi cylinder in 2011, it did not introduce a new technology in the fact that it utilizes essentially the same carbon-wrapped cylinders and breathing air compressors, but it certainly represented a new innovation in that the cylinder became smaller and lighter, allowing for reduced firefighter profile and reducing exertion and fatigue.

The fire service has not historically been early adopters when it comes to technology (new machines or features); however, the fire service has always been open to innovation (new methods or benefits).  The resistance to rapidly adopt new technology is completely understandable. The cost of failure is too high.

So, what does all of this have to do with self-contained breathing apparatus (SCBA)?

The rapidly changing technological landscape provides a variety of opportunities for inclusion into the design of the SCBA. We have already seen the integration of electronic PASS devices, heads up displays, telemetry, communications, and firefighter tracking. Now, we are seeing this technology go a step further, adding a level of user configurability, attempts to calculate time remaining based on respiratory rate, and the inclusion of different alarms. In the future, it is not a stretch to envision wearable activity trackers, biometric monitoring, enhanced environmental monitoring, improved firefighter location tracking, and even more enhanced communications and information management.

The challenge, from both a manufacturer and fire services standpoint, is to separate technology from innovation. Just because something is a feature, does not mean it is a benefit, and this distinction is in the eyes of the customer. Choosing the things we should do from the ever-burgeoning opportunity pool of things we could do.

The SCBA occupies a rather unique position in the chain of protection when it comes to firefighter personal protective equipment (PPE). While all components of firefighter PPE are important to protection, the SCBA is one of those components where failure is simply not an option. Should a helmet crack or turnout gear tear, it may result in an injury; however, failures within the SCBA can lead to much worse. Given the criticality of the SCBA, many firefighters prefer absolute reliability and are wary of technological advancements.

So how to balance these two concerns?

Again, this is not a statement about features; rather, it should be a question of, “What does that feature accomplish and do I need that accomplishment?” The old, “What’s in it for me?”

Let’s go back to my TV for a moment. Even though I have never accessed an app on the TV and had no idea that the TV could install and run apps, obviously a feature that was unnecessary to me personally, I still felt compelled to go through the steps required to update my TV, partly because I wasn’t sure of the ramifications of not installing it and, of course, I always want the latest, greatest, so I installed it.

Total time invested was about two hours, and the result? Well, the result is that I could go back to watching my TV just like I had before I received the email. In the process, I also realized that despite the fact that my TV remote has 56 buttons on it, I was controlling the TV with my receiver remote, which means I was only using one of the 56 buttons – the power button.

So, because my TV had the feature of being able to run apps, I was required to invest a couple of hours of labor and two new batteries (adding to cost of ownership); however, the TV obviously has a processor, memory and Wi-Fi chip inside, and a remote control with 56 buttons with a pre-installed set of batteries – all of which would have added to the cost of the TV.

What’s interesting is that it is quite possible, although I honestly don’t remember, that when I bought the TV, the fact that it was Wi-Fi and app-enabled may have been a reason I chose it, despite a higher price, higher cost of ownership, and additional complications, all in exchange for features I never ended up using. I bought technology, but not innovation.

So how do you avoid this? From a manufacturer perspective, you pay careful attention to the “shoulds” and the “coulds,” keeping only those features that are necessary to realize the innovation being proposed. As a consumer, ask yourself, “If this feature was separately priced, would I be willing to pay for it?”

The average firefighter is one of the most skeptical creatures to ever walk the earth, and the more important the equipment, the more skeptical they become. The need to test and evaluate is deeply ingrained and almost second nature. This skepticism is a healthy thing and has several contributors: 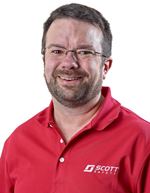 Brad Harvey is a member of the Business Intelligence Team for Scott Safety and is responsible for the Global Fire Services Strategy. Brad began his career as a Firefighter/Paramedic for nearly 16 years before transitioning to the private sector 10 years ago, where he has been very involved with the evaluation, development, and introduction of various technology-related products. Brad also authored numerous articles, for a variety of publications, related to first responders and technology as well as a monthly Thermal Imaging column in Firehouse Magazine for six years.