Across the United States, buildings – from one-family homes to towering skyscrapers – are constructed with strict compliance to a number of codes, covering everything from structural integrity to fire safety to plumbing and energy efficiency. It’s easy to take these codes for granted, but behind the most-used suite of codes in the U.S., there is a rigorous development process, which your department or jurisdiction more than likely already participates in. That development process just got a lot more user-friendly, especially for governmental entities.

To give a bit of background, the International Code Council (ICC) is a U.S.-based nonprofit association governed by representatives from state and local jurisdictions. ICC supports federal, state, and local governmental entities by developing model codes and standards which are then reviewed, adapted, and adopted as the basis for building safety regulations at all levels of government. The I-Codes —including the International Fire Code (IFC), International Building Code (IBC), and International Residential Code (IRC) – support public and first responder safety and the need for one set of codes without regional limitations.

Now the ICC has introduced cdpACCESS, a collaborative online platform revolutionizing the way the model building construction and fire safety codes are developed. As a result, governmental entities are provided with additional opportunity to participate at all stages of development and benefit from code uniformity that encourages local, affordable construction growth and provides for the safety of our built environment. 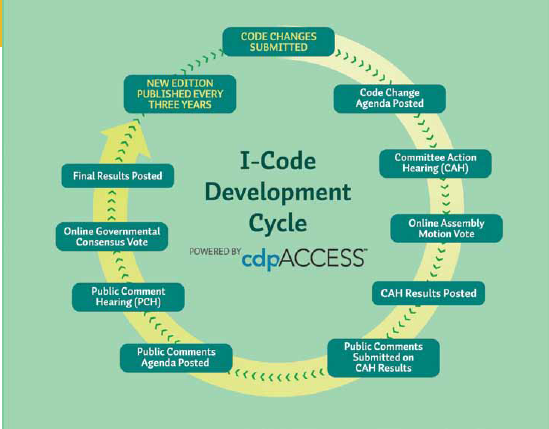 For decades, state and local jurisdictions have been participating in ICC’s open and transparent code development process. It is an inclusive process that allows input from all stakeholders, including code officials, individuals and groups, elected officials, and other representatives of government. They create code change proposals and monitor the proposal’s progress, submit comments, and weigh in on the impact that current regulations or proposed language would have on the built environment. This all used to be a paper-based, mail-in process, but with cdpACCESS, that process has moved online, where users can create proposals, collaborate easily with anyone across the country or around the world, and submit them for a public vote to be included in the next cycle of codes—all at no cost to the user.

Three simple steps will make you eligible to vote:


And that’s not all. With cdpACCESS, ICC voting members (designated representatives from all levels of government, including the fire service) can now securely vote on those code changes online, where before they would have had to attend the ICC code hearings in person, which, while free to attend, often required travel and lodging expenses that many smaller jurisdictions couldn’t (or wouldn’t) afford, meaning larger states with bigger budgets got more say.

Those who may not be able to attend the annual meeting  and hearings will not miss out on the interactions and testimony as all testimony and commentary made on the floor will be available to be viewed on the cdpACCESS page, allowing those voting remotely to be as informed as possible.

“The ultimate goal is to provide a superior way to develop codes and increase participation in code development,” said ICC CEO Dominic Sims, CBO. “We are confident that code development participants and public safety will benefit from cdpACCESS.”

The following is a rundown of the list of cdpACCESS features:


All ICC members are eligible to vote online on assembly floor motions. Only Governmental Member Voting Representatives (agencies, departments, and units engaged in administration, formulation, or enforcement of laws, regulations, or ordinances relating to public health, safety, and welfare) and Honorary Members can vote on proposed code changes/public comments. cdpACCESS allows you to participate in code development from a computer or tablet when you cannot attend in person – and there’s nothing special to install so it’s accessible from any internet connection.

ICC has extensively tested cdpACCESS on a wide variety of Windows and Apple computers and the iPad. cdpACCESS is designed for use on Internet Explorer, Firefox, Safari, and Chrome. Internet Explorer version 7 and earlier versions are not supported. Analysis of ICC web site traffic has shown this will affect a very small percentage of users.

The concept of online participation in ICC’s Code Development Process dates back to 2001 when off-site voting on code changes was used by the three model code organizations that later consolidated to become the Code Council.

Fulton Cochran has been involved in the fire service for over 35 years, starting as a volunteer firefighter in his hometown of Manitou Springs, CO, before becoming a career firefighter and then moving into fire prevention. After serving as Fire Marshal in Breckenridge, CO, he spent 20 years as Deputy Fire Marshal – Engineering with the City of Henderson, NV. Fulton has worked with the ICC on numerous committees and councils. He is currently Chairman of the Fire Service Membership Council , a member of the ICC Codes and Standards Council, and was a member of the cdpACCESS steering committee charged with developing the framework of this program and recommending these actions to the ICC Board of Directors.