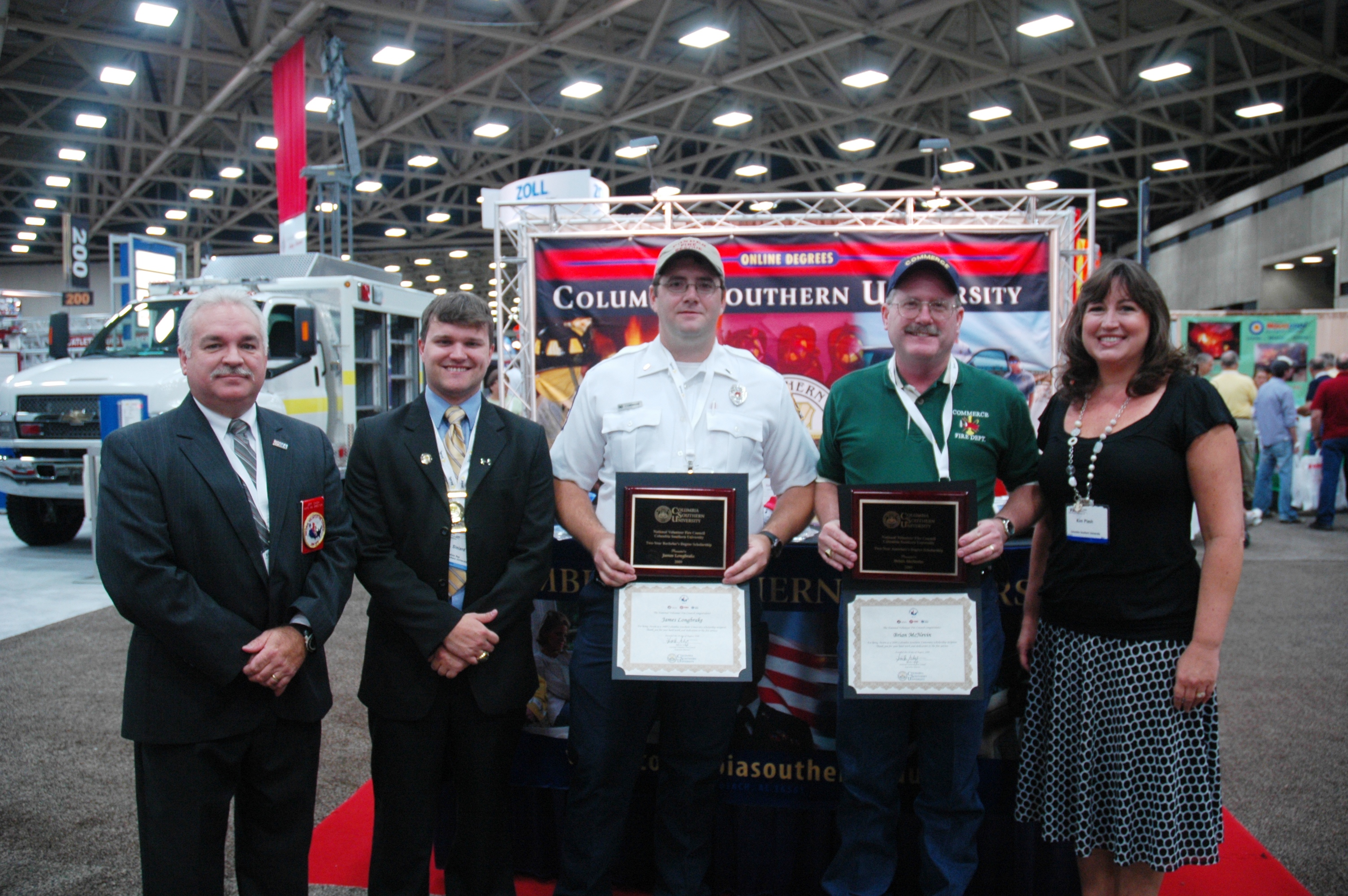 Columbia Southern University (CSU) and the National Volunteer Fire Council (NVFC) began a partnership 10 years ago to provide educational benefits to fire and emergency service personnel. In addition to a discount to CSU for NVFC members and their families, each year two NVFC members are awarded a scholarship to attend CSU. Since 2009, this scholarship has helped many NVFC members launch their careers and further their position in the fire and emergency services.

“We are grateful to Columbia Southern University for their commitment to the volunteer fire service and creating stronger communities through continued education,” said NVFC Chairman Kevin D. Quinn. “Education in the fire and emergency services is monumental to help our boots on the ground operate safely and effectively. The scholarships that CSU has generously provided to NVFC members over the last decade has allowed them to achieve their goals and help their departments to thrive.”

To date, many members have benefited from the CSU scholarship. The recipients are as follows:

With the tenth anniversary of the scholarship program, CSU reached out to past recipients to find out what they have done with their scholarships. Many responded with great news about how the scholarships have made a significant difference in their lives.

Wolven, who works with Southern Stone County Fire District, a combination department in Branson West, MO, got a promotion. “I was the assistant chief and also interim chief at the time I applied for the scholarship. I am now the fire chief ─ officially, he reports. “The opportunity provided by CSU, in cooperation with the NVFC, was greatly appreciated, and a major factor in my being able to further my career in the fire service.”

McWhinney, who works in Monroeville, PA, also gained a promotion with his degree. “Without a doubt, my supervisor has directly related my consideration for the new duties/title and confidence in my performance to my degree and constant pursuit of continuing education,” he said.

Veilleux, who works in Sabattus, ME, used the scholarship to gain his dream job after learning why he was overlooked the first time he applied for it. “I found out I needed an NFPA certification and lacked a college degree. The individual they chose had both. So, I set out to obtain the NFPA certification, which I received in 2013, and with the CSU and NVFC scholarship I received, I was able to obtain my fire science degree at the age of 47,” he said.

“At the end of the interview, I was asked to tell them why they should hire me over any of the other candidates in 60 seconds or less. I used 10 seconds and said ‘Because during my last interview I was overlooked due to the lack of the certification and the college degree, I went out and achieved both. Can the other candidates show that kind of drive?’ They hired me, and I have been in the position for the past three years.”

Smith said his degree in fire administration has been very beneficial for him. “All of the knowledge I learned in my classes at CSU has been applied to my everyday professional life. I’m very grateful for the NVFC scholarship because it not only helped me financially, it helped me achieve my academic goal and helped my self-confidence.”

Although Pospichal, one of the latest scholarship recipients, recently started her degree at CSU, she is finding that the scholarship is already having a positive impact. “My fellow volunteers at the department recognize what a wonderful opportunity this scholarship and education is, so they recently nominated me for assistant chief. I’m nervous and excited for this potential change in status, and I hope to make them proud with this degree,” she said.

CSU and NVFC are certainly proud of her and all of the scholarship winners. From promotions to new jobs, the impressive accomplishments by the winners show that the past 10 years of scholarship awards have benefited members immensely.

As CSU and NVFC continue their partnership, NVFC members are encouraged to submit an application for the next scholarship opportunity to boost their career and education. The application period typically opens in late June. Learn more about the scholarship as well as the NVFC member discount at ColumbiaSouthern.edu/NVFC.