You’ve got the one idea that will make the building code easier to understand, the fire code simpler to interpret, and the project owner’s bottom line to stay in the black. How do you get it into the code?

With cdpACCESS, the International Code Council’s® online tool for code development, submitting code change proposals is only a few computer clicks away. Anyone with an interest in improving the model codes is welcome to send their suggestions to this robust cloud-based tracking, collaboration, and voting system found at www.cdpACCESS.com.

cdpACCESS saves time and money while providing a single portal for code officials and other interested persons to stay on top of proposed code changes, offer their commentary, and – for code officials – determine the outcome by their votes. The concept of online participation in ICC’s Code Development Process dates back to 2001 when off-site voting on code changes was used by the three model code organizations that later consolidated to become ICC.

The development of codes and standards in the United States affects all Americans, as they live, work, and go to school in buildings designed to comply with building codes, and use thousands of products – from Apple I-phones to ZipLock bags – that meet consensus standards, and in most cases meet many different standards, largely developed by a few hundred private sector, nonprofit organizations. Americans sometimes focus on government requirements, but are not often aware of the many private sector standards that are either voluntarily adopted by architects, designers, and manufacturers, or adopted as regulations by federal, state, and local governments.

Most of the jurisdictions in the United States that adopt and enforce building codes and standards use one or more of the International Codes. Other jurisdictions include Guam, Northern Marianas Islands, the U.S. Virgin Islands, and Puerto Rico. The ICC is a U.S.-based, not for profit, 58,000-member association of professionals and volunteers who are responsible for the development, publication, and enforcement of model consensus codes for building and fire safety, including the International Building Code® (IBC) and International Fire Code® (IFC). The IBC is in use or adopted in all 50 states, the IFC is in use or adopted in 42 states, and the International Residential Code (IRC) is in use or adopted in 49 states, the District of Columbia, Guam, Puerto Rico, and the U.S. Virgin Islands. ICC offers free, read-only access to all its current codes at http://codes.iccsafe.org/I-Codes.html.

In addition to publishing these codes, ICC offers its members a variety of important services: code training and education, plan review and code interpretations, technical opinions, inspector certification and agency accreditation, product evaluation, and a range of other products. As code enforcement professionals, ICC Members are encouraged to suggest code changes and vote on them for adoption as model legislation. (See “Step-by-Step for cdpACCESS” at end of article for instructions.)

ICC Members and others with an interest in public safety in the built environment have begun to use the first version of cdpACCESS—the new, cloud-based tool built exclusively for ICC’s code development process (cdp). Once referred to as remote voting, cdpACCESS is much more than that. With cdpACCESS, you can create code change proposals and submit them online. According to professional engineer and certified plumbing designer Julius Ballanco, a regular columnist in PME Engineer magazine, “cdpACCESS maintains the high level of integrity ICC’s code development process is known for and is expected to increase participation.”1

“The ultimate goal is to provide a superior way to develop codes and increase participation in code development,” said ICC CEO Dominic Sims, CBO. “We are confident that code development participants and public safety will benefit from cdpACCESS.”2

cdpACCESS is intended to make the entire code development process open and transparent to all participants as well as any person or entity that may be affected by the codes. The portal includes features that allow users to share information and opinions, as well as watch videos of comments made at the various the code development hearings. cdpACCESS allows anyone to participate in code development from a computer or tablet when you cannot attend in person. This capability alone will save thousands of dollars in travel and lodging expense for those who want to be active in the code hearings. Most important, it makes the entire code process more democratic.

Among the features offered on the cdpACCESS portal are:

* The next ICC Committee Action Hearings are scheduled April 17-27, 2016, at the Louisville International Convention Center in Kentucky. Learn more and register at http://media.iccsafe.org/2016_MarComm/_2016_CAH/index.html.

Since not everyone is an expert in a digital world, cdpACCESS developers have made the tool user-friendly. With a few simple steps, anyone with access to the World Wide Web can submit code development proposals for consideration. ICC has tested cdpACCESS extensively on a wide variety of Windows and Apple computers and the iPad. cdpACCESS is designed for use on Internet Explorer, Firefox, Safari, and Chrome. Internet Explorer version 7 and earlier versions are not supported. Analysis of ICC web site traffic has shown this will affect a very small percentage of users.

Support for cdpACCESS includes help by phone and email to answer questions, receive comments, and suggestions, and report any system errors. The toll-free cdpACCESS hotline is 855-ICC-CDP-1 (422-2371); email can be sent to cdpACCESS@iccsafe.org. Detailed cdpACCESS instructions and a schedule of upcoming webinars can be viewed at www.iccsafe.org/cdpaccess/.

The International Code Council (ICC) has long been a leader in developing its codes and standards in a transparent and open process, exceeding even the strict “openness” criteria required by the American National Standards Institute. Going beyond the requirement to not impose “undue financial barriers” to participation, ICC has long allowed any individual with an interest to participate in public hearings on code change proposals, and even to vote on issues submitted to the assembly, without payment of any registration fee or participation charge. Providing this access, which is subsidized by the membership and the product sales of the Code Council, has long been a hallmark of the ICC process, and has been a factor in the wide acceptance and adoption of its codes and standards by government entities at every level and around the world.

Using cdpACCESS is easy, even for the first timer. Here are the steps to get you started in writing code change proposals: 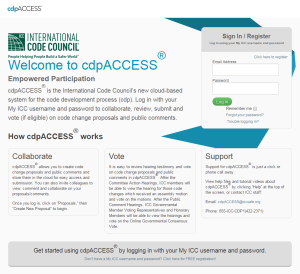 The cdpACCESS opening screen. Here, you can create your account at the bottom of the page, then sign in to begin working. 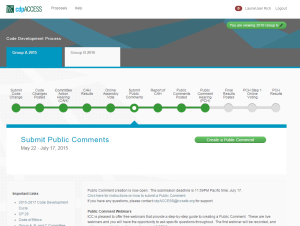 Once you have logged on to cdpACCESS, you can look at the progress of any Group A or B code proposal. The green progress line shows you where ICC is in the code development process for that cycle. 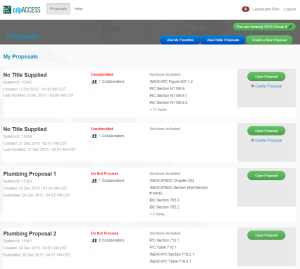 Review all code change proposals, the code sections where they are proposed, who the proponent is, and offer your comments. 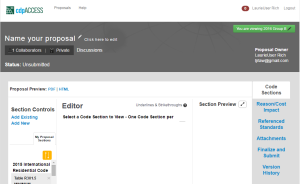 This page enables you to submit your code change proposals. Drop-down menus guide you to the appropriate code section.