California Casualty Looking for the Next “Work Hard/Play Hard” Winner 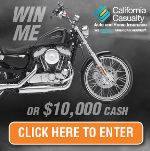 Entries are now being taken for California Casualty’s next “Work Hard/Play Hard” contest. A lucky winner will receive a new Harley-Davidson® Seventy-two motorcycle, or $10,000. The bike is described as a meld of unruly 1970’s chopper attitude with today’s modern power and styling. It is low rider inspired but radically customized.

The contest is open to peace officers, EMTs, and firefighters across the nation – people who work hard and risk their lives to make our communities safer.

Pennsylvania firefighter Robert LaMantia is enjoying long rides on the Harley-Davidson® Forty-eight he won in the “Work Hard/Play Hard” contest in March 2012. Nebraska firefighter Tom Vail took the $10,000 option when he won the contest in August 2013. California Casualty has also thanked other “Work Hard/Play Hard” winners with personal water craft and all-terrain vehicles.

The winner of this latest California Casualty “Work Hard/Play Hard” contest will be announced in early September 2014. Entry forms and complete rules can be found at http://go.calcas.com/harley.

California Casualty provides auto and home insurance to American heroes – including law enforcement officers, firefighters, and EMT’s – men and women who put their lives on the line each and every day.

Headquartered in San Mateo, CA, with Service Centers in Arizona, Colorado, and Kansas, California Casualty provides auto and home insurance to educators, firefighters, law enforcement, and nurses across the country. Celebrating 100 years of service, California Casualty has been led by four generations of the Brown family. To learn more about California Casualty, or to request an auto insurance quote, please visit www.calcas.com  or call 1-800-800-9410.